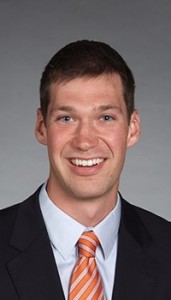 As an undergraduate government major at Dartmouth College, Brian McMillan interned for Senator Richard Lugar from his home state of Indiana and for the Legislative Affairs Office of the Office of Management and Budget. Through these experiences, McMillan came to understand the power of public policy to effect positive change, and hoped to commit himself to public service. After graduation though, McMillan was offered a position in the private sector at BTS Inc., a quickly growing consulting firm in San Francisco. The job would give him the opportunity to travel the world working in partnership with Fortune 500 executives to improve their businesses, and he decided to accept the position. While working in the private sector, McMillan led a project that generated $29 million in new revenue and a 9 percent increase in profitability for one client. He brought in more than $100,000 in new consulting engagements and developed and facilitated an educational simulation that was used by more than 2,000 retail store managers at the Gap. In collaboration with executives at Kimberly-Clark, Coca-Cola, and Wal-Mart, he created a new program that uncovered ways for the companies to pool resources to increase their profitability. In the end, he taught more than 90 seminars to senior executives at major Fortune 500 companies and, in just three years, earned three promotions—from business analyst, to consultant, to senior consultant.

During this time, McMillan met his future wife, who was a special education teacher at a high-need school in Oakland, California. After experiencing the challenges that her students faced first hand, he became convinced that improving K-12 education would solve some of America’s biggest challenges. He left the private sector to join Teach For America, serving at a public elementary school in East Oakland, California—an area where more than 90 percent of students qualify for free and reduced-price lunches and only 40 percent of students graduate from high school. There, he learned that exemplary teachers play an important role in the improvement of public education, but that new policies are also needed to create a more equitable and effective education system.

Driven by his passion for eliminating educational inequity, specifically in Detroit, McMillan is now pursuing a dual-master’s in public policy and business at the University of Michigan. This summer, he will complete a 12-week internship with Mayor Duggan’s office through the Bohnett Public Service Fellowship program—a fellowship that links outstanding public policy graduate students from the Gerald R. Ford School of Public Policy with public service needs in the City of Detroit Mayor’s Office.

In addition to his work on education policy, Brian McMillan is a fourth generation firefighter and is currently a firefighter for the Ann Arbor Township Fire Department. He has also served as the President of the Board of Directors of ARISE High School, a public charter school in Oakland, California.